How does the resistor color code work?

Resistor values are often indicated with color codes. Practically all leaded resistors with a power rating up to one watt are marked with color bands. The coding is defined in the international standard IEC 60062. This standard describes the marking codes for resistors and capacitors. It includes also numerical codes, as for example often used for SMD resistors. The color code is given by several bands. Together they specify the resistance value, the tolerance and sometimes the reliability or failure rate. The number of bands varies from three till six. As a minimum, two bands indicate the resistance value and one band serves as multiplier. The resistance values are standardized, these values are called preferred value.

The chart below shows how to determine the resistance and tolerance for resistors. The table can also be used to specify the color of the bands when the values are known. An automatic resistor calculator can be used to quickly find the resistor values. 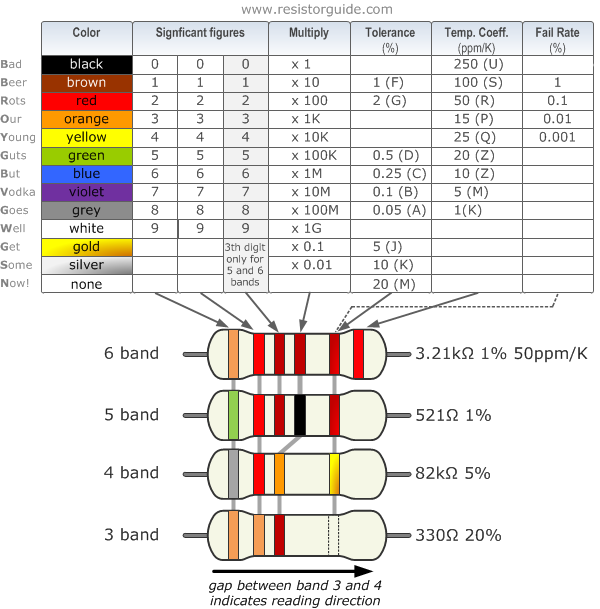 In the sections below examples are given for different numbers of bands, but first some tips are given to read the color code:

Resistors that are produced according to military specifications, sometimes include an extra band to indicate reliability. This is specified in failure rate (%) per 1000 hours of service.  This is rarely used in commercial electronics. Mostly the reliability band can be found on four band resistors. More information about the reliability can be found in the US military handbook MIL-HDBK-199.

A resistor with a single black band is called a zero-ohm resistor. Principally it is a wire link with only function of connecting traces on a PCB. Using the resistor package has the advantage of being able to use the same automated machines to place components on a circuit board.

5 band resistor with a 4th band of gold or silver

Five band resistors with a fourth band of gold or silver form an exception, and are used on specialized and older resistors. The first two bands represent the significant digits, the 3th the multiply factor, the 4th the tolerance and the 5th the temperature coefficient (ppm/K).

For high voltage resistors often the colors gold and silver are replaced with yellow and gray. This is to prevent having metal particles in the coating.