What is Ohm’s law? 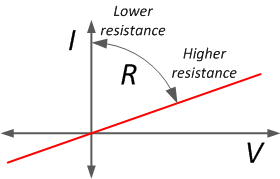 where I is the current in amperes, V the voltage in volts and R the resistance in ohms. To illustrate: a resistor of one ohm subjected to a current of 1A has a voltage difference of 1V across its terminals. The equation is named after Georg Ohm. In 1827 he published his findings that form the basis of the formula that is used today. He performed a large series of experiments that showed the relation between applied voltage and current through a conductor. The law is therefore empirical. Although Ohm’s law is one of the fundamentals of electrical engineering, at the time of publication it was received with criticism. The ohm is adopted as the official SI unit for electrical resistance. Gustav Kirchhoff (known from Kirchhoff’s circuit laws) made a generalization that is more used in physics:

where σ is the conductivity parameter (material specific), J is the current density in a location of that material, and E the electric field in that location.

Resistors are passive elements that introduce resistance to the flow of electric current in a circuit. A resistor that functions according to Ohm’s law is called an Ohmic resistor. When current passes through an Ohmic resistor, the voltage drop across the terminals is proportionally to the magnitude of resistance. Ohm’s formula stays also valid for circuits with varying voltage or current, so it can be used for AC circuits as well. For capacitors and inductors the law can of course not be used, since their I-V curve is inherently not linear (not Ohmic).

Ohm’s formula is valid for circuits with multiple resistors that can be connected in series, parallel or both. Groups of resistors in series or parallel can be simplified with an equivalent resistance. In the articles Resistors in Series or Resistors in Parallel is described in more detail how to do this.

Ohms formula can be used when two of three variables are known. The relation between resistance, current and voltage can be written in different ways. To remember this, the Ohm triangle calculator might be helpful. Two examples below will show the use of the triangle calculator.

A resistor dissipates power when a current passes through it. The energy is released in the form of heat. The power is a function of the current I and the applied voltage V:

where P is the power in watts. Combined with Ohm’s law, the power law can be rewritten into:

Ideal resistors dissipate all energy and don’t store electric or magnetic energy. Each resistor has a limit of the power that can be dissipated without creating damage. This is called the power rating. Ambient conditions can reduce this value. For example, an enclosure around the resistor or a higher ambient temperature will reduce the amount of energy the resistor can dissipate. This effect is called derating, and can be visualized with a power derating chart. In practice, resistors seldom have an indicated power rating. However, the majority of resistors are rated at 1/4 or 1/8 watt. The circle diagram helps to quickly find the relation between electric power, current, voltage and resistance. For each of the four parameters is shown how to calculate their value. 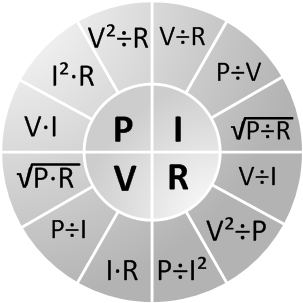 Below several examples of Ohm’s law problems are given. You can try first to solve the problem by yourself before reading the answer.

The resistance value in ohms is often marked with a color code on the resistor. The combination of colors tells the value as well as the tolerance of the resistor. For more information about this topic, refer to resistor color code.